No Bikes, No Ice Cream, No Bacon, No Ice, No Signal, No Laundry – St George Island Spring Break 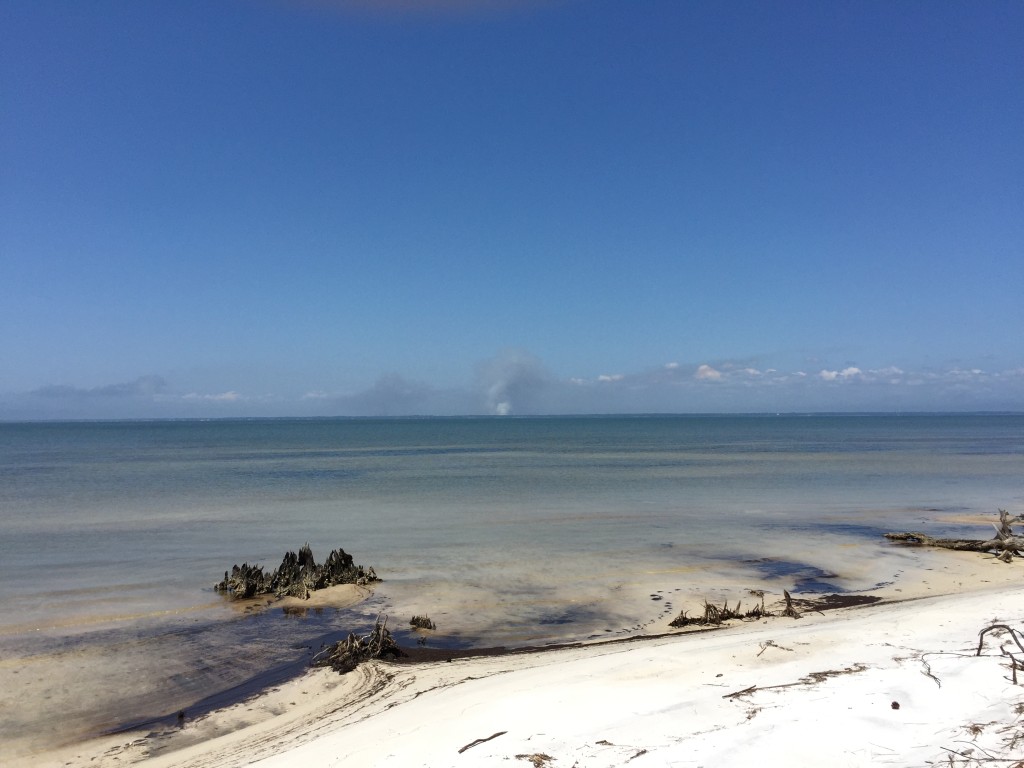 View from the bay side of SGI.

Based on the fact that people seem to love to go to St. George Island, Florida with their dogs, and the $24/night camping available at Dr. Julian G. Bruce St. George Island State Park, trying a new place for Spring Break seemed to be worth the risk. Unfortunately, our risk calculation was poorly researched from the start. Our normal beach destination, Santa Rosa Beach, FL, is only a 9 1/2 hour drive from Louisville, KY vs. over 11 hours to SGI. Fortunately, we broke up the drive both ways with overnight stops, but that seemed to just add to the perceived travel time.

I’d imagine part of the appeal of SGI is its relative remoteness. The state park is on the eastern tip of the island as well, which makes it even more remote. The campsites are 4 miles from the entrance to the park (with official speed limits of 15-25 MPH). It’s another 2-3 miles at 35 MPH from the state park to the first commercial businesses. Camping with limited food supplies meant that eating often required a 30+ minute round trip. The state park didn’t have laundry facilities as our normal Spring Break destination state park does, and the closest laundromat is back across the bridge (probably 20+ minutes away).

Somehow, the squirrels and raccoons on a island that is only connected to the mainland by a 6 mile long bridge are more numerous and aggressive than the animals in the park at Santa Rosa Beach, Florida, just 2-3 hours west on US-98… it only required a few minutes of someone carelessly leaving a campsite unattended for food to be devoured by squirrels in the day and raccoons at night. Of course, it’s not that surprising for experienced campers that animals will target your food, but the efficiency and skill at which they did it *was* surprising. One such casualty was a pound of bacon left in a cooler. The mosquitoes were also out in way more force than other camping trips to the panhandle.

The business owners on SGI expressed surprise that last week was the busiest week they’ve ever experienced. We weren’t able to try to rent bikes until Monday morning, and by then, there were no adult bikes available on the island. We ended up with with 2 20″ bikes and a beat up adult tricycle with a basket for $125. Not really that bad a deal, but one of the bikes went unused most of the week because of its size.

Restaurants seemed to be a bit pricey relative to our regular stops of Edisto, Santa Rosa, and Outer Banks. Taxes are 7% SGI tax + 2% local option, which further inflates your bills.

Truly Disconnected and the Restaurants

Wireless signal was non-existent for us. Looking at coverage maps, it appears that the magic carrier down on St. George Island is Verizon.

Harry A’s and Subway were staples of the week. Harry A’s is moderately priced, but they have solid wifi, which was necessary because our T-Mobile phones were rarely capable of even texting. Subway actually advertises “We have wifi”. Obviously, it’s a pervasive problem.

The Blue Parrot Paradise Cafe was good and is on the Gulf side which was good for the view, but horrible for cell phone reception and they don’t have wi-fi.

Eddie Teach’s was a pretty miserable experience on a Wednesday night. They ended up being crowded, and then we made the mistake of ordering a pizza for my daughter. The pizza clearly comes from elsewhere–pretty sure it was from the gas station in Eastpoint, 6 miles away. When the pizza came back, the order was wrong, so they reordered. We had a dispute with the owner about whether we should be paying for a pizza that was 30 minutes later than the rest of the order, etc. I won’t be going back there again if I end up on SGI, and I’m definitely not ordering the pizza. My wife got an order of nachos for $10.99 that was pretty mediocre, too.

It seems that the businesses run into supply issues due their remoteness. Subway ran out of bacon. The ice cream shop next to the beach store had a few pathetic looking tubs of partially melted ice cream where there should have been 30 selections or so. The state park ran out of ice for sale on our second to last day (Thursday) with no apparent expectation of it being replenished. Edisto Island in South Carolina seems similarly isolated, but doesn’t seem to have the same supply problem… yet.

Two pleasant surprises of our trip

I didn’t bother with my own bike (considering there weren’t any available), but if I had, I would have ridden down the multi-use path that goes down the main road across the island. It goes on for miles (13+ if I recall correctly), but it wasn’t scenic enough for my interests, and it was too far away (4 miles) to run to. Instead, I first explored the limited access park road beyond the last beach access. It’s mostly sand and gravel, and wasn’t suitable for either trail or standard running shoes. More importantly, it had no shade to speak of, so I ran 3 of the 4.2 miles out, and ended up overheating from the sun and walking back.

I next tried the path to the primitive campsite (and Gap Point). 2.5 miles (one way) of about 50% dunes with slightly more shade than the other paths. It was more interesting, but there wasn’t the usual mental stimulation of a trail run, as there’s pretty much only one direction to go in. On my way back, I tried the East Slough trail that goes over wooden bridges. I was pressed for time and baking in the sun so I cut that exploration short.

Maybe it was more humid than normal this year. Maybe SGI was more crowded this year.