We’ve had mixed results with our Craftsman V60 Mower (CMCMW270) after a little over two years of ownership.

UPDATE: After a back and forth on a response to a review on their page, I appear to have gotten a check for the cost of the larger battery that’s still available (5.0Ah, though, not the original 7.5Ah). Still trying to decide whether to get a couple of batteries or upgrade mower.

While we’ve had plenty of cordless lawn equipment such as trimmers and blowers, this was our first lawn mower that wasn’t gas powered. Being able to mow without breathing in gas fumes for an hour is a huge benefit to an electric mower, and not having a cord attached seems like the only way to go.

Another huge benefit is that it starts and stops pretty easily. The initial battery life on the V60 was only about an hour or so for our cutting needs, but you could start and stop the mower in an instant in cases in which you might keep a gas mower running just to not have to fight with starting it back up again.

The biggest drawback is that the battery life of the 7.5AH battery now only lasts long enough for at most 2/3rds of the yard to be cut. This is only 2 years after purchase. You’ll also notice that if you search for CMCB6075 (the 7.5AH battery) or go to the above link, there are no sellers of the brand new battery, only the occasional eBay listing. We did get a decent discount over brands that weren’t dying out, but didn’t expect the support for this thing to disappear so quickly.

A similar nuisance that is compounded by the abysmal battery life is the fact that the blade doesn’t quite spin up to the speed of a gas mower, which left us with missed blades of grass everywhere, even when the blade was fresh and sharp.

I’ve liked the experience enough with this mower to not really want to go back to gas-powered, but I don’t look forward to paying the premium and being on the hook for replacement batteries.

Reviews of M1 Macs for Development

So far, the key interest for me have been the potential drastic improvement in battery life. I’m almost willing to sacrifice a bit of short term productivity to get there. I don’t know that the experiences sound any worse that trying to get my favorite development environments productive on Windows or a non-Debian flavor of Linux:

So we have a battery hungry front door lock that requires 4-AA batteries to power. I noticed that the Sunbeam batteries purchased from Dollar Tree (3 pack for $1, or $1.33 per replacement) were getting replaced every month or so, so I was curious if that was normal as well as how much I was really paying for them.

Thinking maybe I could do better, I bought a 96 pack of EnviroMAX Batteries (affiliate link) on Woot (but for 25¢ each instead of being similar in price to the Sunbeam… so it was $1 per replacement instead of the $1.42 at the current moment for that link.) The batteries lasted 13-25 days, with a generous average of 21 days, or about 4.7¢ per day… The last replacements were more like 2 weeks and I stopped tracking them, but there were sets in the middle that made it 3 weeks or better, but it was horribly inconsistent.

I just bought a large pack of Kirkland batteries, so I’ll be sure to track the performance of those and see how it lines up with the other batteries.

I’ve been tracking the Sylvania 60W 2700K Equivalent A29 (affiliate link) vs. the AmazonBasics 60W Soft White Non-Dimmable (affiliate link) over the past year and a half after noticing that I was replacing bulbs a lot. With 40+ bulbs in the house, it’s not as uncommon as I would have initially expected to be replacing a bulb on any given day.

I have a limited amount of data so far, but definitely have an apples to apples (same socket in same fixture) comparison, and it looks like the Amazon Basics bulb lasted 242 days vs. the Sylvania’s 308. While I have no other apples-to-apples comparisons, the remaining Sylvania bulbs have lasted at least ten months.

Dyson DC 40 Shuts Down from Overheating

This is the second time in about a month that my Dyson DC 40 has shut down from overheating. The symptoms start with loss of suction from the head assembly (leaving dust bunny trails, etc.) while the hose end still had good suction.

I started out by disassembling the head unit and cleaning out the long dog hairs there, but there wasn’t any change in the amount of suction when vacuuming carpet and dust bunnies were still being left behind.

I also made sure to empty the canister of all of the collected dog hair, but there was no change in suction. Finally, I decided to remove the cover on the HEPA filter to let it cool down. 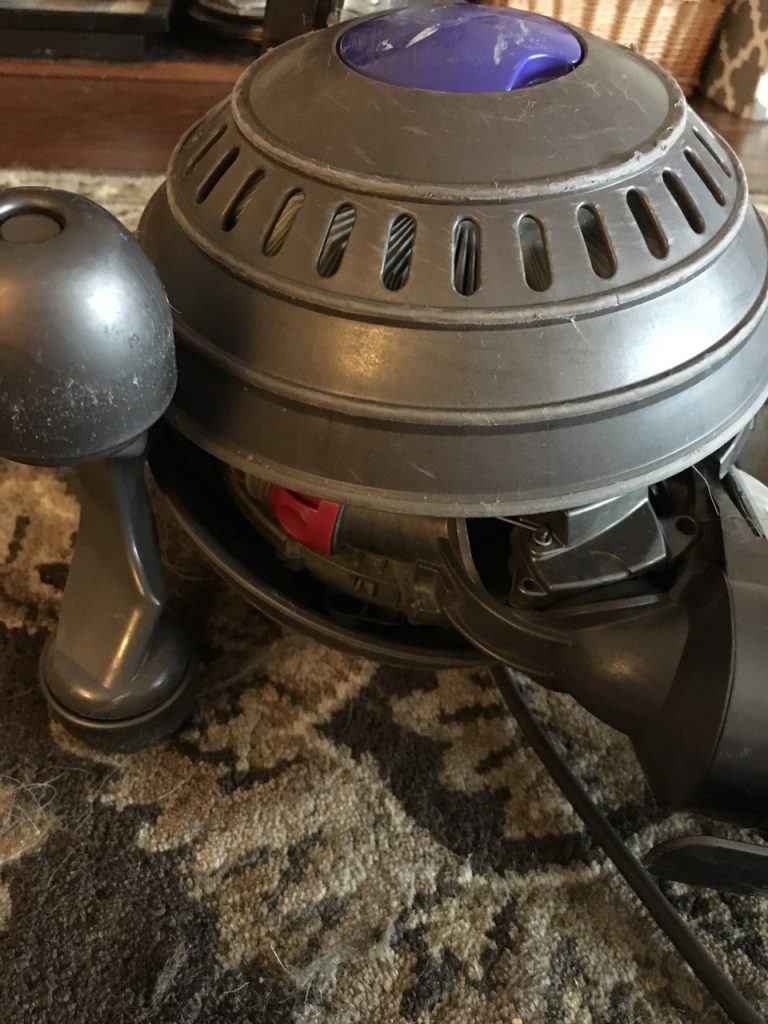 Once disconnected, I more clearly saw the hose connection that clogged the last time, and sure enough, a combo of dog hair and something perfectly sized to get wedged and stuck had completely blocked off the flow of air. 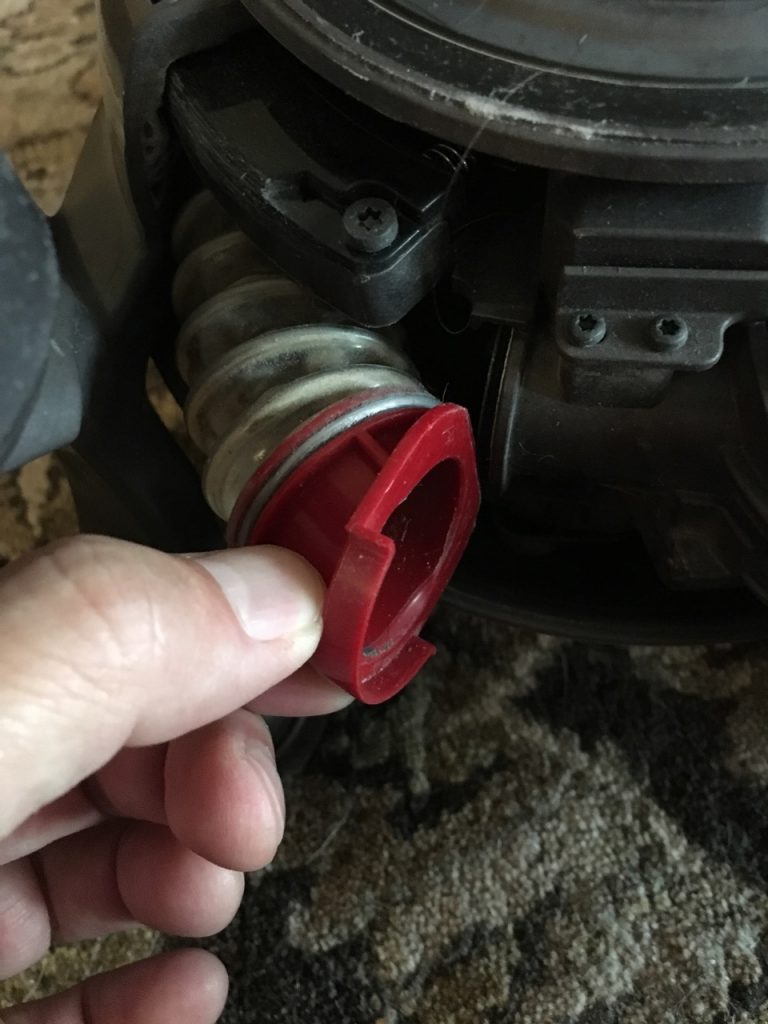 Unfortunately, now the vacuum cleaner has shut down until it resets and cools down. Maybe Dyson would like to study the special properties of our dog’s hair?

Update: Leaving the cover open and the vacuum unplugged for about 30-45 minutes brought it back to life.

Update (February 25, 2018, one week after this post): The DC 40 stopped working. We checked all the clog points, cleared the filters, unplugged, let things cool down, and replugged… It never came back. We ended up buying the Shark Rotator NV650 at our local Walmart instead. The price was only $20 more than my refurbished DC 40 cost, and is much quieter and more portable.

I read through Introducing Elixir on Safari Books Online because I had read through a beta edition of Programming Elixir: Functional |> Concurrent |> Pragmatic |> Fun

through The Pragmatic Bookshelf and wanted to see about getting a slightly different take on Elixir at the same time I was getting caught up with the current state of Elixir.

We’ve bought several cheap toy helicopters that have usually met their demise via the breakage of one of the components that rotates at high speed breaking. Air Hogs has been a favorite brand because they are usually cheap and your face on retail shelves. [The charging port on this doll bears the Air Hogs brand, as well.]

[Somewhat related: our big dog doesn’t like any of these flying things and thinks it’s his mission to “kill” them, giving us an extra obstacle to their longevity.]

This fairy doll is the first one we’ve had that doesn’t look like a standard helicopter for us.

When taking off from its base, the doll floats fairly gracefully to the floor. The doll mostly hovers within a foot or two of the surface underneath her. However, you can cup your hands directly below it and it’ll float above your hands briefly instead. I noticed when I did this, the fairy would float steadily to the ceiling and hover and gradually come back down.

The doll will also take off from your hand, but it’s very easy to not be vertical at take-off and/or to present an uneven surface below it, causing to lift off erratically. I recommend letting it take off from the base stand each time.

We’ve had 5-10 crashes with the doll. One thing I noticed with this doll (unlike manually controlled helicopters) is that power is immediately cut to the rotors when a collision happens. This minimizes the high speed damage that the blades and balances endure when you don’t react quickly enough to cut the power on a remote control.

Between the ease of flight, the safety cut-off, and the relatively more durable structure overall, this doll seems like the best value in the under $50 helicopter department for those of us who really don’t know how to successfully fly a toy helicopter, anyway.

Note:
The doll in the video is the Deluxe Light Up Flutterbye Fairy – Rainbow 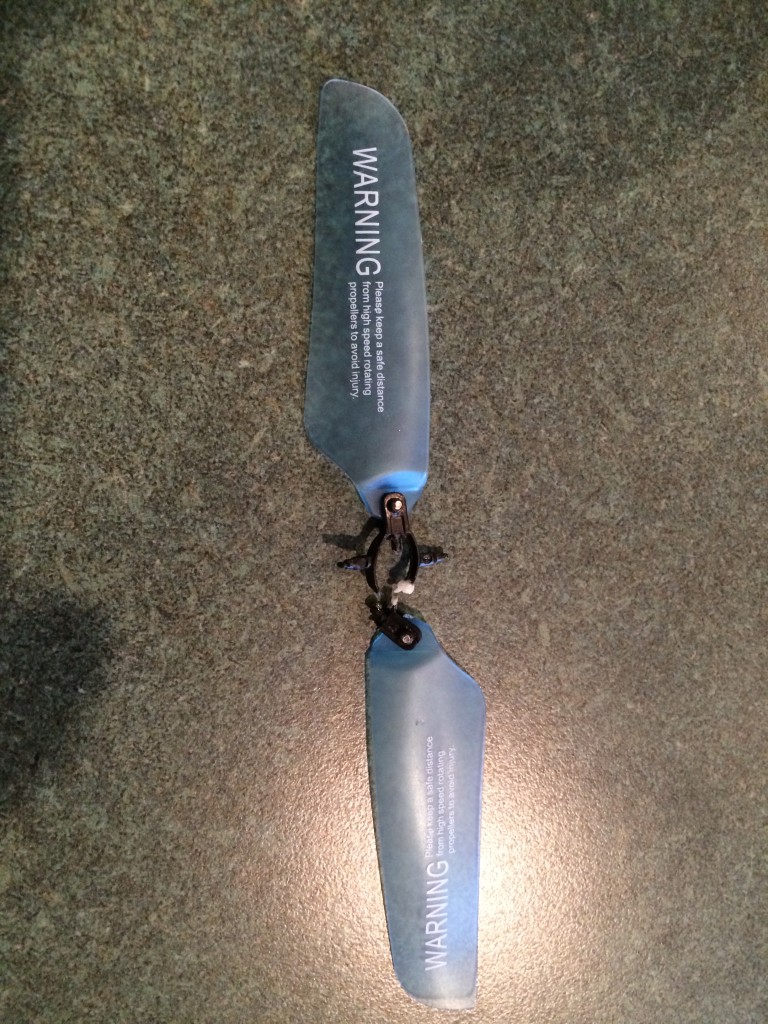 I decided to try the Dollar Shave Club Executive (6 blade) model for a month. The subscription for 4 blades per month is $9.

The initial shipment came with their own shave butter, which I tried for my first shave. The shave butter broke down too quickly for my skin and facial hair thickness, and didn’t seem to do much for the shaving experience, but then again, I generally use a shave cream or hair conditioner while shaving.

The blade angles felt a bit too sparse–or maybe the space between them clogged too quickly, though I didn’t notice that this was the case. My first shave attempt was on about 3 days growth, and felt spotty irritation in my skin and notices several patches that had clearly been shaved, but had not been shaved particularly closely.

On my second shave attempt on about 2 days growth, I used my Gillette Sensitive Skin to try and alleviate the irritation and possibly get a bit closer with the shave. After shaving, I had a lot of spots in my facial hair that were about a half day’s worth of growth in length. Whether using the shave butter or my Gillette Sensitive Skin shaving cream, I experienced a small amount of irritation–not as much as a cheap disposable, but a little more than the Schick Quattro.

The closeness of the shave is ultimately as close as the Quattro, but with noticeably more irritation.

Hope this helps you decide if Dollar Shave is an option for you. Interestingly enough, the Executive blades are $2.25 per cartridge vs. the Gillette Mach3 Base Cartridges 15 Count

(Amazon associates link) per-cartridge price of about $2.06 per cartridge.

I bought a couple pairs of these shorts at Target because they looked decent (although, definitely not high-end). Immediately after running 7-10 miles in them, I had a raw spot from the waistband stitching. Eventually, I learned to make the best of that (wear them only on shorter runs). However, the lining quickly started tearing away from the waistband, so they’re not really reasonable to wear anymore. I love my Reebok running shorts (all styles) and would recommend them despite being more than twice the price of the Champion shorts. The durability alone is worth it.